Did someone say cake?

A Cake Smash and Splash photoshoot is a great alternative to celebrate your baby’s first birthday milestone, plus…there’s cake involved!

These fun Cake Smash and Splash photoshoots generally last between an hour-90mins and take place in my studio in York. The package price includes the backdrop set up(s) complete with balloons or bunting, pompoms, cake stand and also the cake. If you have any allergies please let me know upon booking.

There are 3 steps to your baby’s Cake Smash and Splash session, let me take you through each;

This part of the Cake Smash and Splash photoshoot is totally optional but a nice additional keepsake to add to your gallery.

We set up against a fine art style backdrop away from the cake smash set up to take a quick few photographs of your baby in their favourite outfit before presenting them with the cake. 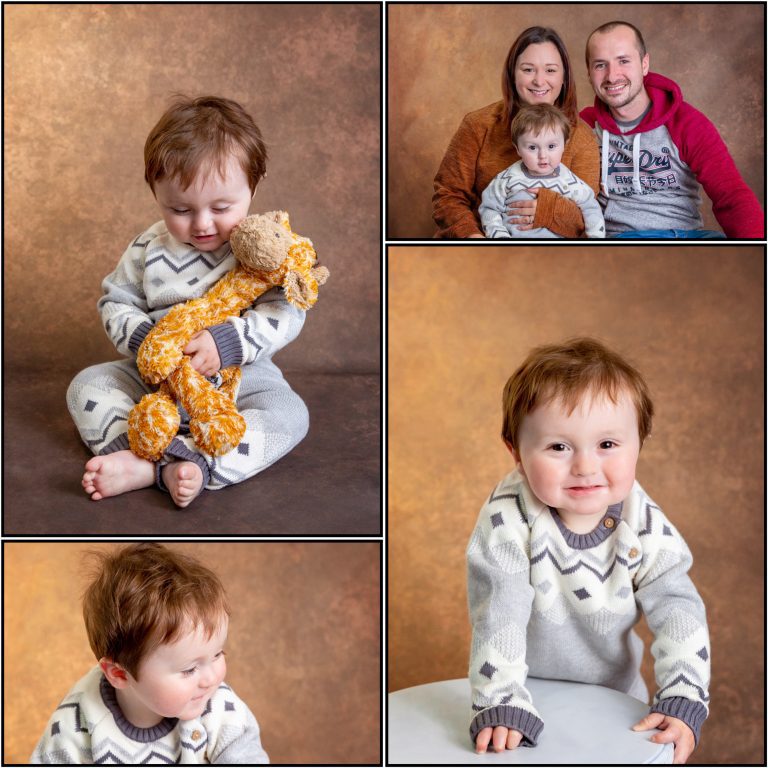 The main event! Bring on the cake!

While you’re switching baby into their cake smash outfit, I sort the finishing touches for the Cake Smash and Splash background set up and fetch the cake ready for some smashing and smushing!

We generally allocate the longest time period for the cake smash as babies (usually) love playing with the cake, and of course eating it as well!

Included in the standard cake smash set up is either bunting (with a few added balloons), or a balloon garland, and some paper pompoms, all keeping to your chosen colour scheme which we discuss prior to the day.

The cake and cake stand are also provided. The cake is made specially by a local cake maker, and will be a giant cupcake style. Any other designs may incur a small extra charge. 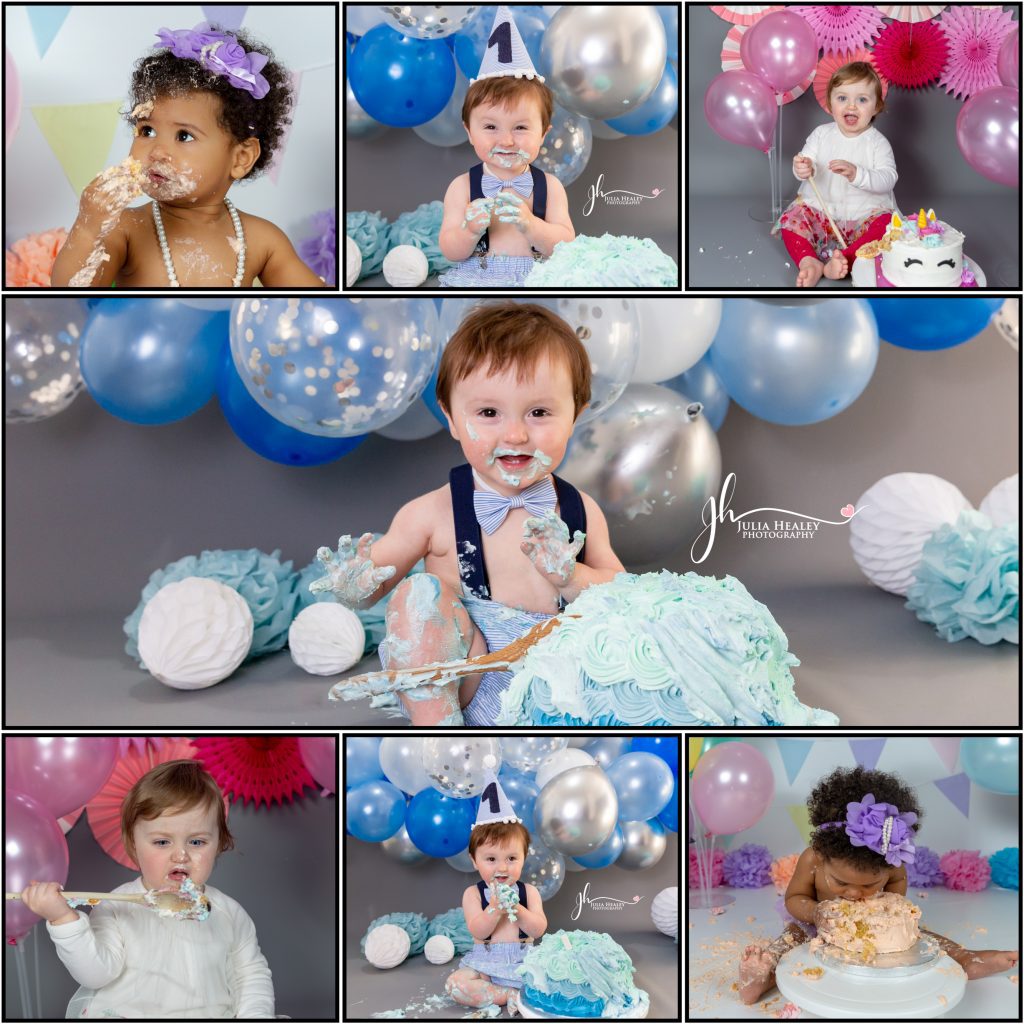 We end your cake smash and splash photoshoot with, you’ve guessed it, a splash in the tub; add some bubbles and rubber duckies and away we go!

Again, this part of the photoshoot is completely optional, but it’s great fun for your baby to have a splash in the bubbles (plus, if they’re totally covered in cake from the cake smash, it’s helpful to have a quick bath before getting them back into the car). There are also plenty of baby wipes available throughout as an alternative.

Please bring a snuggly towel with you and a spare outfit for when the cake smash and splash photoshoot is finished. 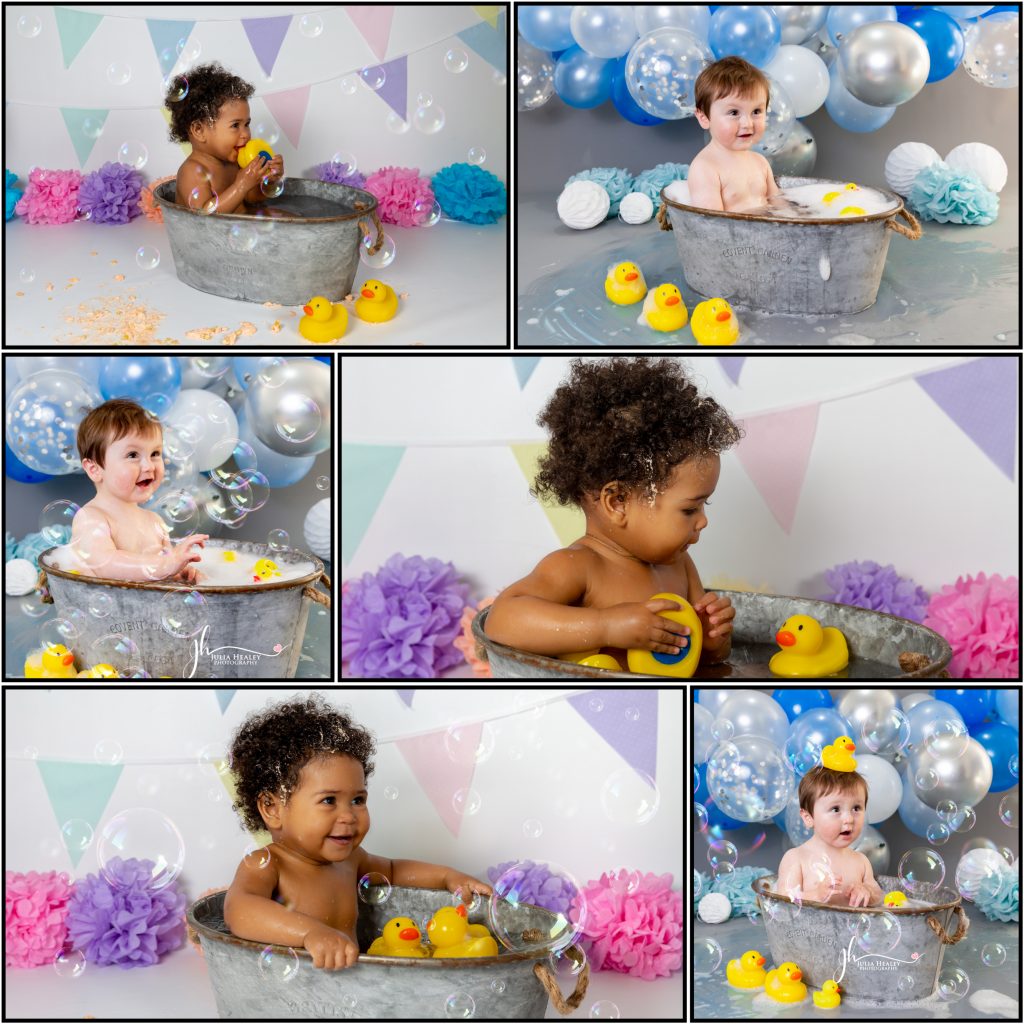 The Cake Smash and Splash photoshoot session fee is £125, which includes a complimentary 10″x8″ professional mounted print along with the cake and decorations mentioned above. Once your images are ready, I send you details to your own online viewing gallery, so you can look through your finished images from the session and choose which you would like to order from the huge array of stunning wall art, albums and digital files which can all be purchased at an extra cost. 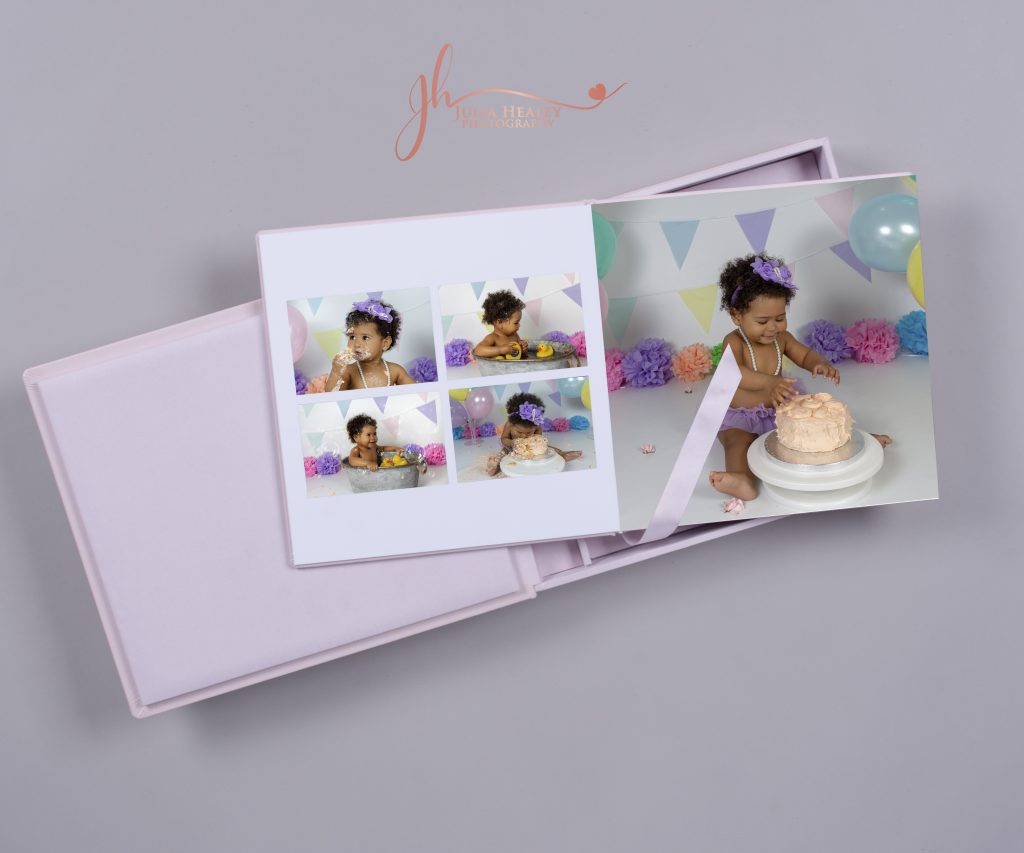 Stunning personalised photo album complete with an acrylic front cover and matching box, in your choice of colours and either a vegan friendly leather, textile, suede or velvet finish, with 20 lay-flat pages (10 double page spreads) produced with a premium lustre or deep matte paper. Extra double page spreads (2 pages) are available to add on from £10 per spread.

Your portrait photograph album is designed by Julia Healey Photography following your specification, so no two albums are the same, creating a stunning, unique keepsake of your nearest and dearest. 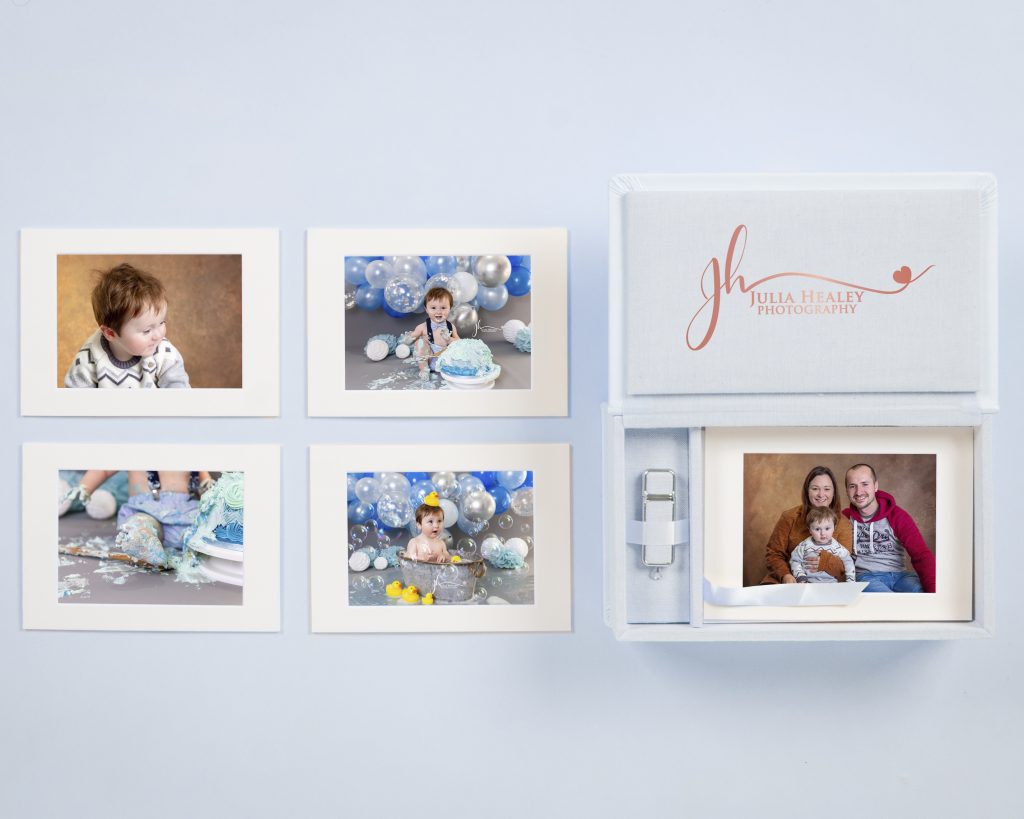 Add a stylish walnut wooden USB to this package with your selected images for just £150.

A folio box is a stunning story box of your portrait session photographs in elegant matted frames. Choose your favourite 10 prints from your portrait photoshoot session (plus your complimentary 10″x8″ mounted print included in the photoshoot) to be printed on premium lustre or matte paper and presented in either a vegan friendly leather, textile, velvet or suede folio box in your choice of colour and the option to upgrade to include a stunning acrylic image front cover (extra prints available at an extra cost). 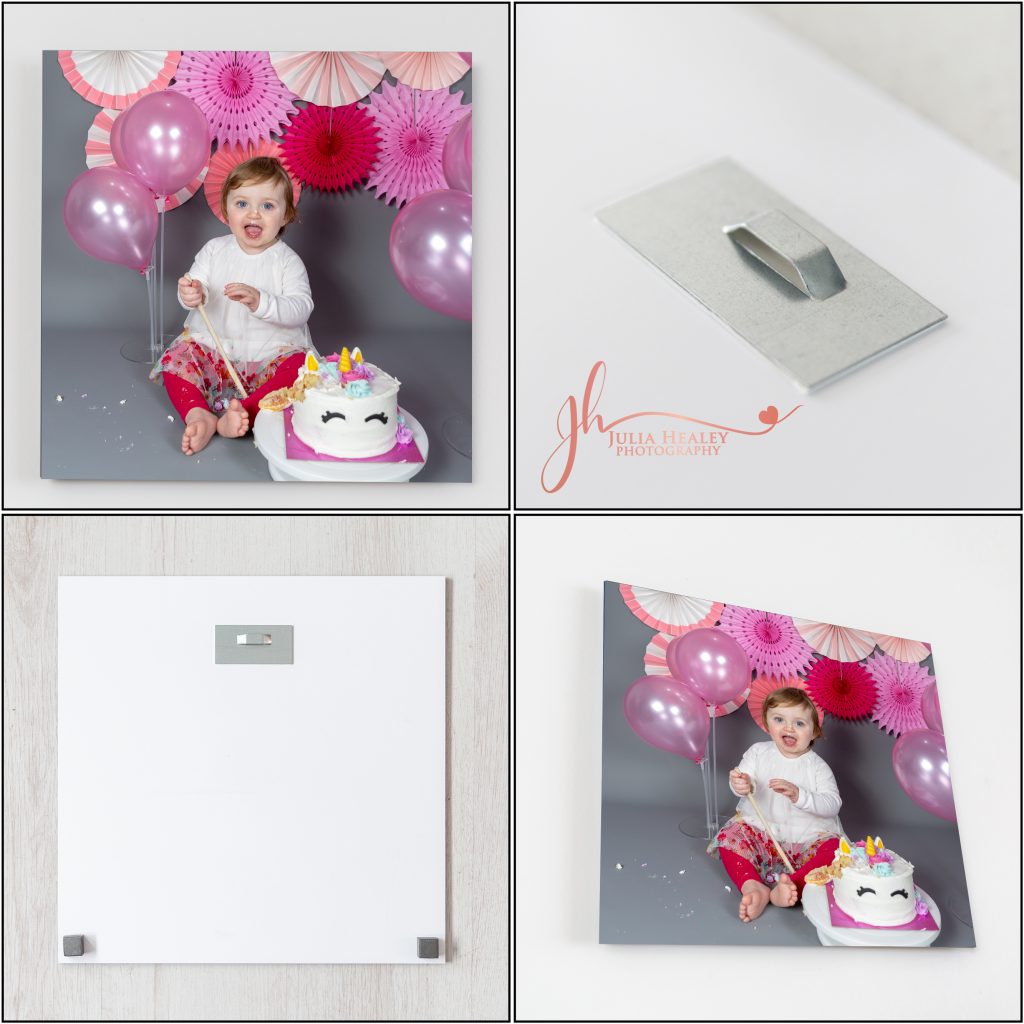 Acrylic panels are a stunning alternative to framed photographs, and bring a touch of fine art into your home that you’ll want to show off.

These are 5mm thick acrylic, come with a ready to hang hook and start at 8″x8″ 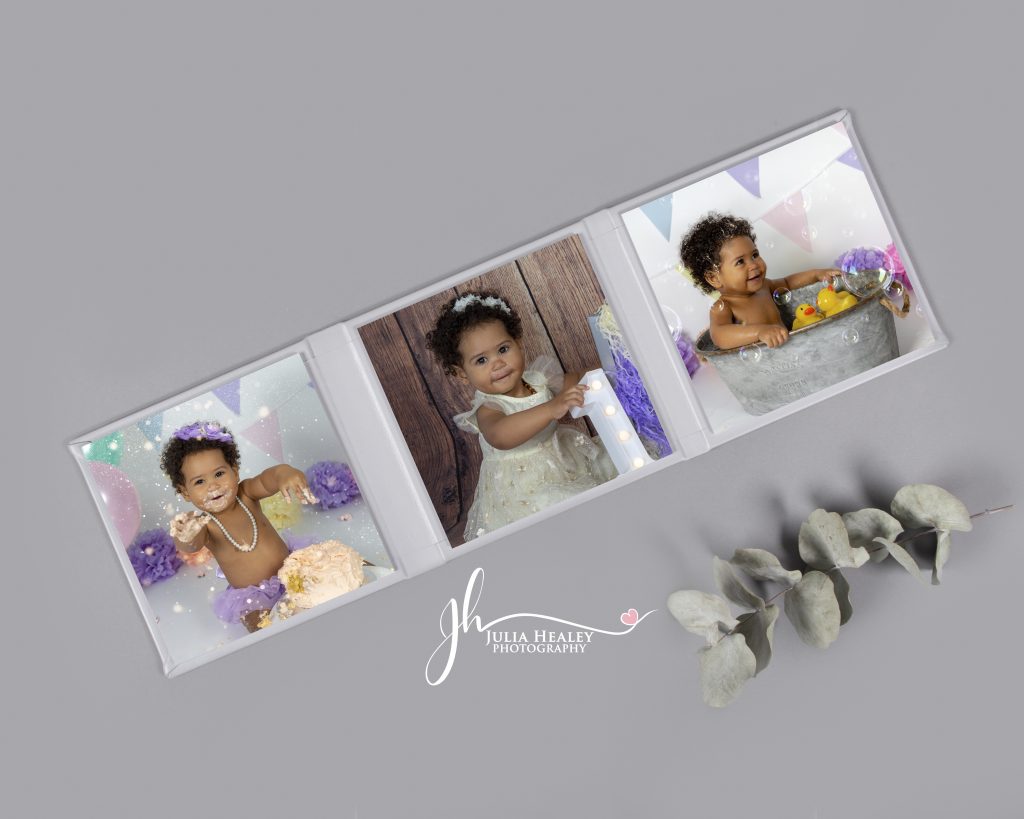 A fabulous take on a stand alone photograph, combining 3 of your favourite images from the session and transforming them into a folding piece of art, perfect for sideboards and mantle pieces.

Comes in a vegan friendly leather finish in your choice from a range of colours, and come in either square or portrait orientation. 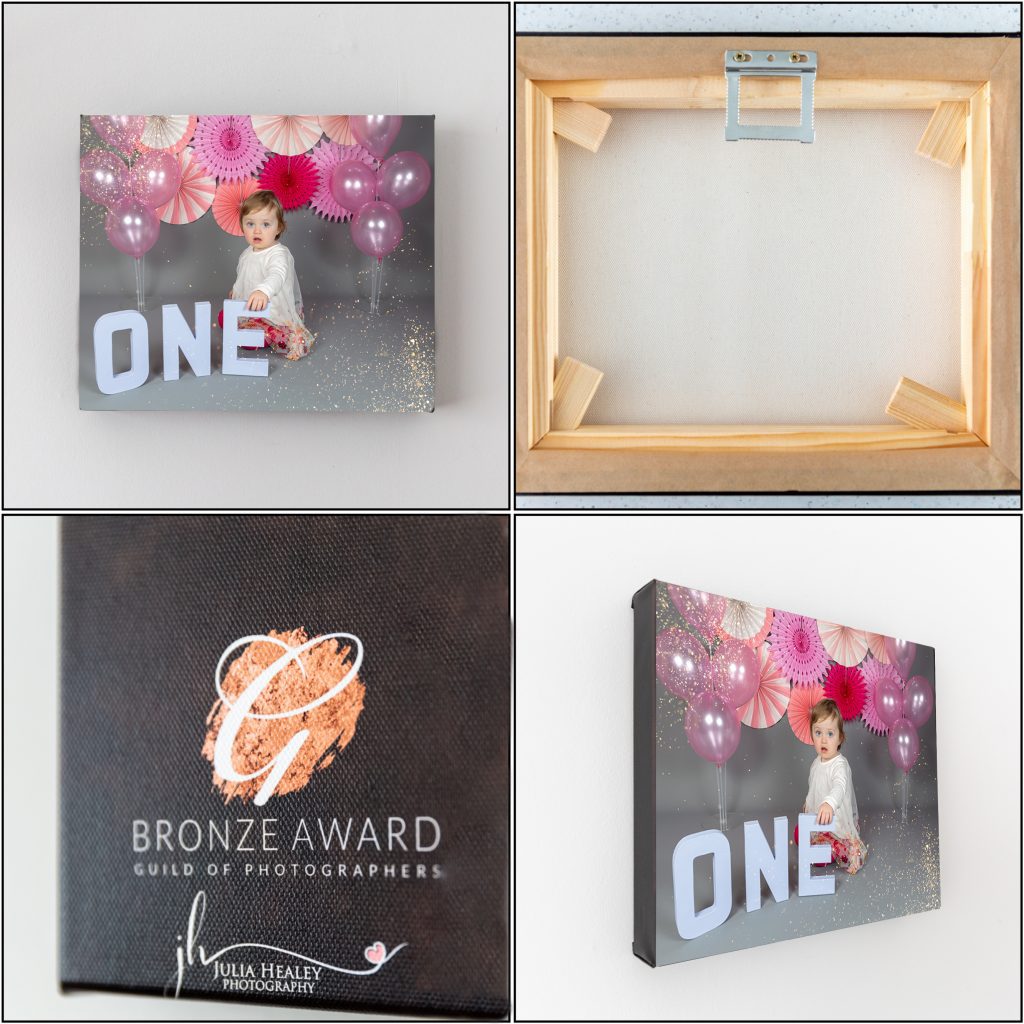 These popular floating canvas prints are a fabulous alternative to traditional framed prints, and come with a simple hanging kit ready to go (please note the hanging kit may vary to that in the photo). They are printed on high quality 100% natural art canvas material, then coated with a protective varnish providing UV protected and stretch wrapped onto 1.5″ oak bars.

A huge range of other sizes, including larger are available, please enquire for details and pricing. 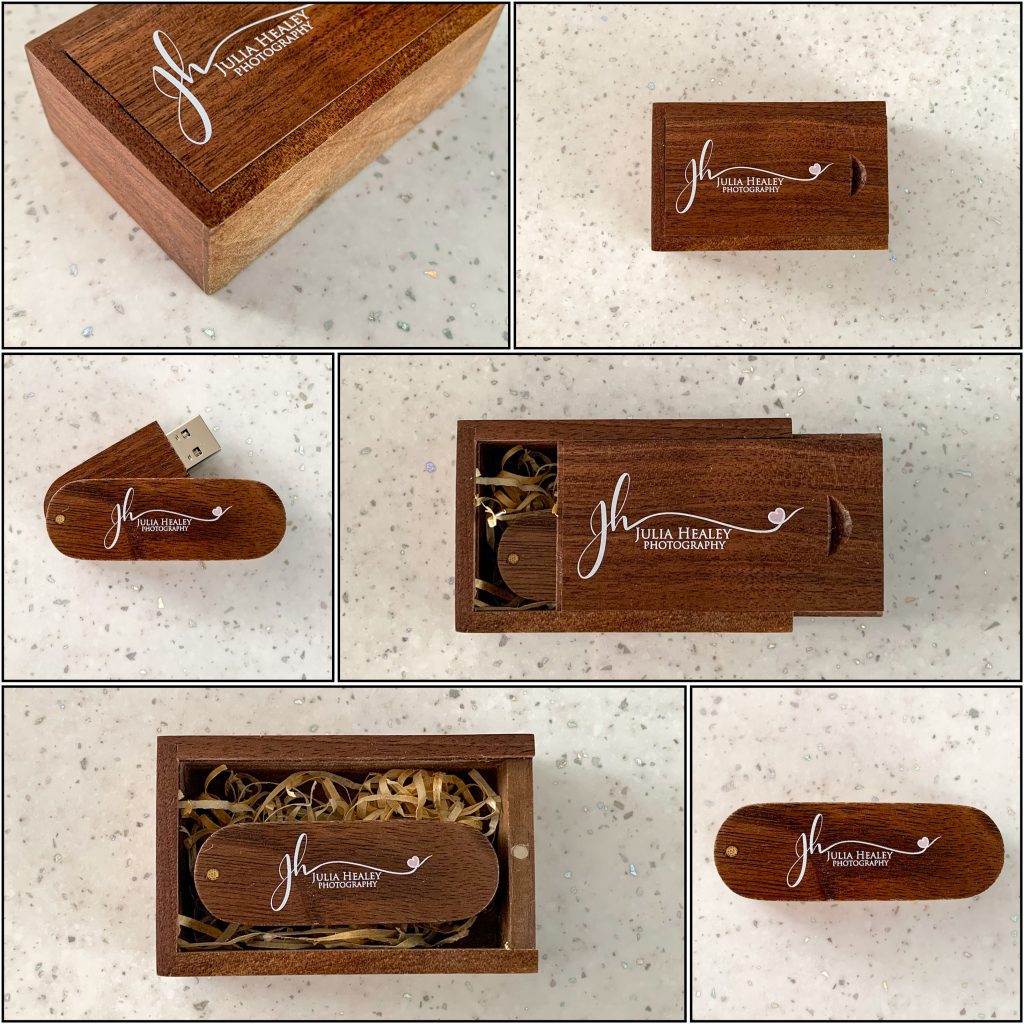 Digital images stored on one of these stylish walnut wooden USB memory sticks with matching box are a great way to archive your previous memories to keep forever. Even better, your selected prints will also be available to download from an online password protected album so they are always available to you as a backup, and so that you can order wall art at a later date.

Digital images are £20 each, or purchase multiple for a cheaper price;

If you have any queries or would like to book a Cake Smash and Splash Photoshoot, please do not hesitate to pop me a message using the form below.